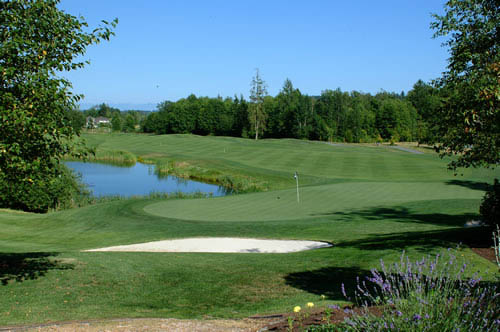 Vancouver, B.C. (April 17, 2017) – There was some superb golf played as the sun came out over the Easter weekend at Morgan Creek Golf Course in Surrey, British Columbia, where a full field of 96 juniors maneuvered their way around the difficult Thomas McBroom layout in the Maple Leaf Junior Golf Tour’s Humber College PGM Classic.  Humber College, based in Toronto, Ontario, sponsors a series of tournaments on the Maple Leaf Junior Golf Tour (MJT) and offers graduates a three-year Professional Golf Management diploma recognized as Canada’s premiere golf business program.

Players were competing for qualifying spots into the US Kids Teen World Championship in North Carolina this July as well as for titles in eight different divisions on the Boston Pizza-presented MJT, including the newly created Collegiate Division for 19 to 23 year players. One of these Collegiate competitors, Sarah Lawrence, 19, of Duvall, Washington, posted the lowest under par score for the tournament, firing a five-under-total of 71,70=141 to win Low Overall and the Women’s Collegiate Division title. Lawrence, who has twice been crowned MJT National Girls Champion, continues to impress with her dedication and talent.

PLYR Closest to the Pin