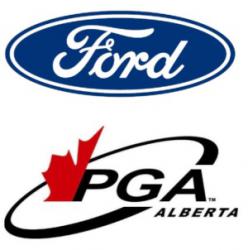 A Mini Tour for players aged 12 and under also ran on day one, July 20th, alongside the MJT Junior Tour’s three-day event, where the Division winners were Jayla Kucy (9) of Camrose, Tillie Claggett (11) of Calgary, Jonathan Meng (10) of Edmonton, and Logan Graf (11) of Red Deer. Click here for these results.

In the three-day MJT Ford Series / PGA of Alberta Junior Championship, the MJT Junior Boys Champion was 19-year-old Chris Murray of Calgary. Murray shone throughout the three days, shooting outstanding back-to-back even-par rounds of 72-72-72 (216) to win by four strokes in his final event as a junior. After the round, Murray said, “I feel great; it’s my last-ever tournament as a junior so I’m going to savour this moment,” and added that the key to his success in the 54 hole event was ‘probably my 13 birdies.’

Tough competition ended up with the MJT Ford Series / PGA of Alberta Juvenile Boys Champion as Chandler McDowell, 15, of Springbrook, AB, who defeated Michael Valk, 16, of Medicine Hat, AB, by just two strokes in a very tight race. Down by two strokes after the second day, McDowell shot a 73 on the third day to go 76-73-73 (222) and narrowly oust Valk, who shot 75-72-77 (224). McDowell’s highlight was a birdie on hole 17 on day three to take the two shot lead heading to the 18th.

Sturgeon County native Brody Eggleton, 14, was crowned MJT Ford Series / PGA of Alberta Bantam Boys Champion after firing spectacular scores of 76-67-69 (212) off the Bantam tees to finish eight strokes better than the rest of the division. Eggleton’s under-par second and third rounds propelled him to the top of the leaderboard after a close first round. “I just tried to keep the ball in play,” he said.

Hunter Thompson took home the MJT Ford Series / PGA of Alberta Peewee Boys championship trophy with scores of 75-75-71 (222). The 11-year-old from Calgary was in a tight race with fellow Calgarian Cooper Lindberg until the third day, when Thompson shot one-under to finish off the tournament and said how pleased he was with his performance. “This is my first-ever under-par tournament round.”

The MJT Ford Series / PGA of Alberta Girls 15-19 Champion was Alicia Easthope, 16, of St. Albert, AB, who just managed to edge out 17-year-old Rachel Ung to take home the trophy. Easthope’s three day score of 74-78-81 (233) was just enough to outduel Ung, who shot an 82 on the last day to lose by one. Alicia said after the win, “It’s awesome to get the win in my division; I really got into a rhythm after my chip in on 10.”

The tournament also featured Long Drive and Closest-to-the-Pin Competitions as well as Comeback Awards, where the divisional winners were as follows:

The next Maple Leaf Junior Golf Tour event in Alberta is the MJT Prodigy Series at Sundre Golf Club in Sundre on July 30th to 31st, which is also a qualifier for the North American Junior Amateur (NAJA), and the MJT International Players Championship 2016. For more information or to register please visit www.maplejt.com .

About the MJT:
The non-profit Maple Leaf Junior Golf Tour presented by Boston Pizza is Canada¹s number-one played Junior Golf Tour as well as the only national junior tour run exclusively by PGA of Canada Professionals and the ‘Road to College Golf’ in Canada. The organization is generously supported by Boston Pizza and Premier Partners Ford of Canada, Mr. Lube, Cleveland Golf, Srixon, Gatorade and Tugo, in addition to valued Tournament and Product Partners. The MJT hosts more than 70 events across Canada, including free Ford Go Golf Junior Clinics, the MJT Mini Tour for 7-12 year olds, and multi-day events for competitive players which also qualify juniors for international competitions. The program offers annual awards, scholarships, and frequent player incentives to help reward player's performance and participation throughout each season. MJT alumni include many Professional Tour players and PGA of Canada Professionals, as well as Canadian Amateur, National and Provincial Junior Champions. The MJT aims to develop champions, in golf and in life, promoting the game from grassroots through to provincial, national, university and professional level.
- 30 -