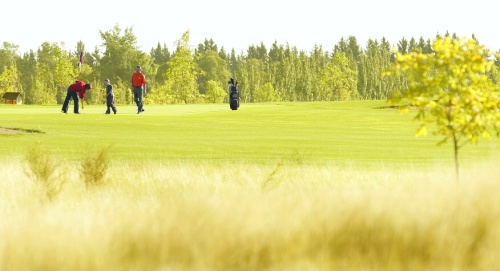 Winkler, M.B. – (May 11, 2015) – A full field of 70 young golfers turned out for the Boston Pizza-presented Maple Leaf Junior Golf Tour’s Manitoba’s Season Opener at the Winkler Golf Club in Winkler, MB on May 9th and 10th, excited to be playing some competitive golf again and braving the cold temperatures over the two days. The tournament was also a shortlist qualifier for the IMG Academy Junior World Championships in San Diego, CA, this July.

17 year old Izac Silagy out of Winnipeg was Low Overall Champion and MJT Junior Boys winner after shooting 71-75 (146).  He was able to hold off Stefan Lavallee, 17, from Steinbach by one shot. “I’ve played in MJT events over the past five years and it’s great to finally play a tournament again,” said Silagy. “It’s a honour to win – there are a number of good players and it’s very tough to compete with them.”

Spencer Norrie, 15, from Morden, MB, won his first MJT event with a solid score of 75-74 (149) in the Juvenile Boys division. “I am pretty excited (to win) but I’ve never been more nervous in my life,” he said, stating that he chose to play because ‘Winkler’s a great course and there are always strong competitors here.’