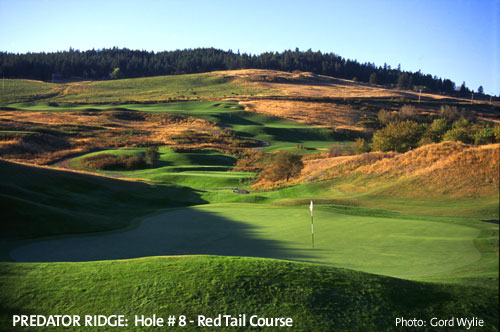 Vernon, BC – (August 12, 2015) – Both Mackenzie Barrie and Lionel Taylor ended their junior careers on a high with repeat MJT victories at the Maple Leaf Junior Golf Tour’s Ford Series at Predator Ridge Golf Resort in Vernon, BC, on August 10th and 11th . Scores were as hot as the weather, highlighted by a hole-in-one by Zach Gardner of Penticton, BC, who aced the fourth hole and won a Miura Gift Certificate for his achievement.

Lionel Taylor, 19, out of Kelowna, BC, went low overall in the tournament in addition to capturing his second MJT Junior Boys trophy in as many starts with a stellar two day score of 72-69 (141), fending off fellow Kelowna resident Drew Harvie and Calgary native Chris Murray who both shot 74-73 (147).  “Putting saved me when I was struggling,” Taylor said, adding, “My birdies on 16 and 17 coming in to shoot 69 were my highlight. This was my last MJT and it feels great to win.”

Vernon’s Mackenzie Barrie, 19, battled it out with Penticton native, 18-year-old Haley Hewer, for the MJT Girls 15-19 division title. Trailing Hewer by four strokes after day one, Barrie made a stellar comeback on day two and improved her score by ten strokes (79-69=148) to repeat as champion in this event and win her last junior tournament by one over Hewer’s 75-74 (149). “I felt confident playing on my home course and I just came off of a victory last week,” said Barrie.